Excerpt: Handcuffed To The Sheikh 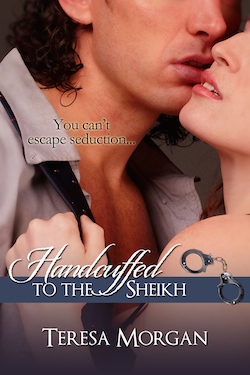 A Novella: The Sheikhs

Max tried to lean away from him so he couldn’t feel her heart pounding a crazy beat under her ribs. Her entire body had turned traitor. How could her hormones go into overdrive for the guy who’d just drugged and abducted her? It wasn’t fair. She looked at the floor, praying the blush incinerating her cheeks wouldn’t betray her.

No hope. He caught her chin in one hand and forced her to look into his. For an instant, she thought she saw a spark of amusement there, before he narrowed his gaze to grey slits.

“On your knees, Maxine Rosalie Foss,” he ordered.

Kneel? But that would put her at eye level with his… What did he want her to do?

Incensed by the unfairness of it, she wanted to scream ‘never,’ but she didn’t trust her voice with that many syllables. “No.”

“Do you prefer to be locked together like this forever? I don’t mind if you don’t.” His seducer’s lips quirked up at one corner.

In a flash, she saw what he wanted. She was supposed to lower her arms so he could step out of the circle made by the handcuffs. She hadn’t thought she could blush any harder. Damn, she must be purple in the face by now.

“You could unlock me instead,” she suggested, without much hope.

“But ya hayati.” A scarlet tongue wet his full bottom lip. “That would be so much less fun for me.”

He was in control and she couldn’t do a thing about it. The more she resisted, the more he’d enjoy watching her writhe. Before she could think too much about it, she lowered herself to one knee and put her hands on the floor. Her cheek touched muscled thighs encased in dark, soft denim. She tried not to think about that, either.

He took his time stepping back, drawing out her mortification as long as possible. Before she could stand again, he planted a leather boot on the chain of the cuffs. She couldn’t misread the message. He had all the power. She could submit, or suffer.

On instinct, she looked up to see pitiless grey eyes smoldering at her. “Are you certain you will never apologize to me, Max?”

« Return to Handcuffed to the Sheikh

The Jewels of the Desert

Keep in contact through the following social networks or via RSS feed: